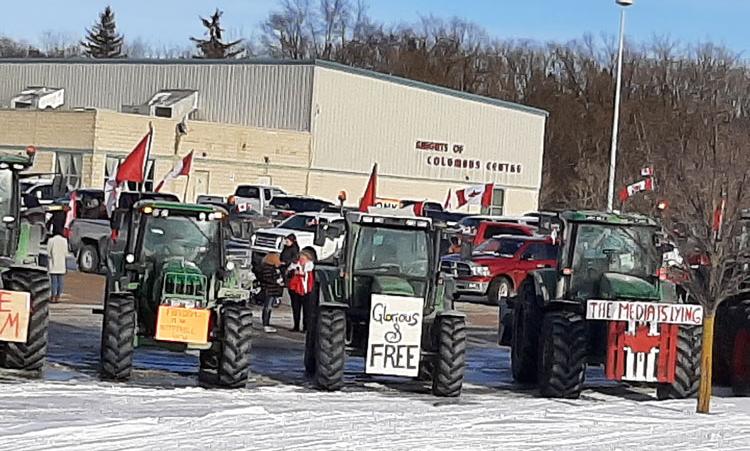 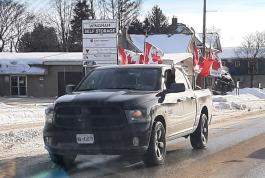 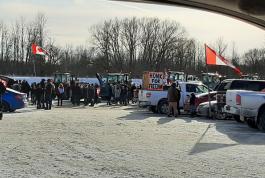 A Freedom Convoy support group has been formed in Huron County to promote awareness of the goals of the trucker convoy which has assembled in Ottawa. If you were outdoors on Saturday February 5th, you might have seen and heard a convoy of trucks, tractors and cars which drove throughout Huron County with horns blaring and flags waving. The streets of many towns, including Wingham, Blyth, Goderich and Clinton were lined by well wishers.

The Ottawa trucker convoy is an anti-mandate movement that includes the vaxed and the unvaxed who insist the state has no right to threaten and coerce people into taking the experimental vaccines. For many vulnerable Canadians, in the early days of the COVID pandemic, the experimental vaccines made sense when offered on a volunteer basis. However, now when the jabs have turned out to be ineffective in either preventing the disease, or spreading the disease, and adverse side effects are becoming better known, forced vaccination crosses a sacred line of individual liberty.

Of course not everyone is in agreement with the mandate freedom movement. Canadians are indeed divided. According to Prime Minister Trudeau, a man triple vaxed and suffering from COVID himself - this is a fringe movement of the unvaxed. For a population who have been fed a two year diet of fear and by loss of friends or family, this movement is an affront to their sense of personal safety. Understood.

However, it appears Canadians are awakening to several unpleasant facts. We now know Prime Minister Trudeau engineered the “unnecessary 2021 election” to use COVID politics as a wedge issue to divide Canadians into warring camps of vaxed and unvaxed. He wanted to win a compliant majority government at any cost. This fact has been plainly put on display this week with the defection of Liberal MP's Lightbound and Robillard who are now breaking ranks and speaking out.

Things did not turn out the way Trudeau wanted. After an uninspiring election campaign, only 62.5% of the electorate showed up to vote, and of that number, only 32.5 % voted for the Liberal Party. While Trudeau succeeded in retaining power, he received only a 20% endorsement from all eligible votes. This is a "fringe" number by anyone's calculation. He actually narrowly lost the popular vote to the Conservative Party.

Of course, in politics the facts don't always matter. It is how the story is framed and the narrative massaged. The national news media is always the first draft for future historians to make sense of our common experience. An informed electorate is a vital ingredient to good government.

As the national debate continues (thanks to the truckers doing something), the core issue may turn out to be a movement to return Canada to it's foundational form of government.  We used to call it “responsible government” where MP's represented the people to government rather than acting as sales agents for the Prime Minister's office.

We need to restore the role of a free press. What happens in a democracy when journalism goes rogue and develops a narrative that is not anchored by the facts? Or even worse, what happens when journalists no longer observe and record? What if they believe their role should be to intervene and direct the narrative according to their own ideological beliefs -where the end justifies the means? How then should democracy respond to the hidden hand of self-interest?

For anyone paying attention, they should see the Trudeau government actually did Canadian's a favour by making media bias more transparent. They have “invested” $600 million of public money to prop up failing Canadian mainstream media companies and have transformed what was pillar of democracy into a sinister agent of misinformation. Have you noticed the mainstream media is more interested in keeping Her Majesty's Loyal Opposition accountable then it is in keeping the governing Liberals accountable for their policies? It is a February of national crisis and our Prime Minister's presence is scarcer than Wiarton Willy on a frosty winter's day. Where is the media's call for leadership? Is name calling from his COVID cave sufficient to meet the media's expectations from their Prime Minister? This seems to be a very low bar of achievement.

So there you have it plainly said. The second unpleasant truth is many Canadians have awakened to the media agenda. You see it in the protest signage, and now you hear it in everyday conversation, “...the media is lying.” The people know this is so because they can see for themselves first hand on numerous websites, social media feeds, and through personal involvement in the freedom movement, what is actually happening. Furthermore, the Liberal government has now introduced to Parliament a new version of it's internet censorship legislation to help Canadians avoid hearing an unapproved narrative.  We are a G7 country. This is embarrassing and the world is now watching.

We are a nation fiercely proud of our standing in the world as freedom defenders. We have spent national treasure and lives to uphold the banner of freedom. So perhaps when you next hear horns blaring and flags waving in Huron County, Ottawa, Quebec City and numerous other communities which will spring up, think about what a Canadian awakening can do to avoid the fate of other countries like Venezuela who were once free and prosperous. An awakened Canada will be a united Canada. Who could have imagined that on the same day our freedom demonstration drove through the county, a similar demonstration occurred outside the National Assembly in Quebec City? For the first time in many years a crowd broke out singing proudly in French, “O Canada”. In Ottawa a French speaking man carrying a Quebec flag embraced a trucker wrapped in a Canadian flag. He said he had always been a proud Quebecois but that day was the first time he was proud to say he was Canadian.

Have you heard of such things before? You can if you look for it online.  It's all there for anyone to see.

Do you want to part of the next Huron County convoy for freedom? Click here to find out where and when to be part of this positive message of hope.